Song Stories pt. 3 Said The Beast To The Bearded Lady 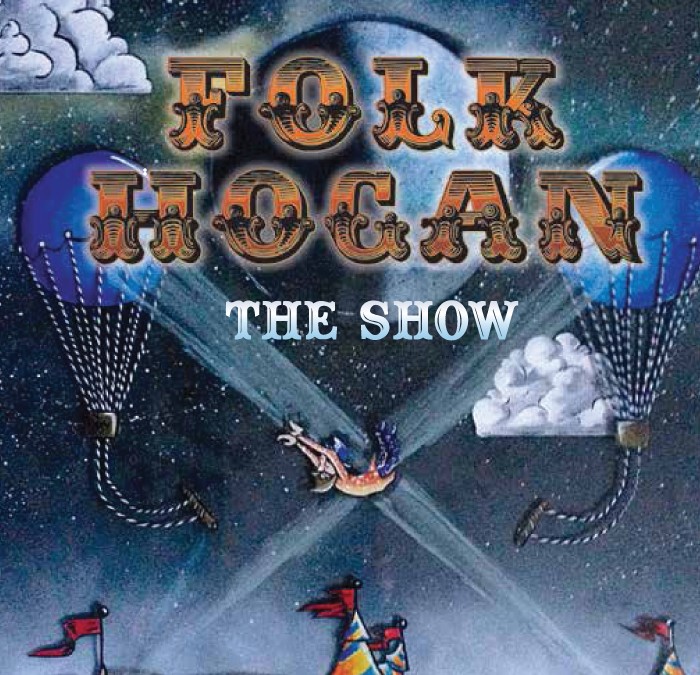 The third installation of Song Stories is a request from our #1 fan “Atomic Rob”, who loves this song so much he got a tattoo in honor of it, which is the single coolest thing that has happened in my life. 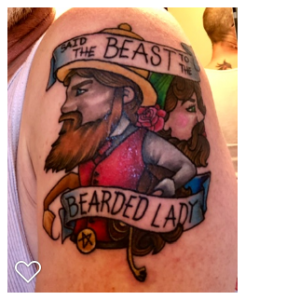 As always, first we will discuss the background, then go over the lyrics with an explanation, then the writing process. If there is a song you want to have dissected shoot me an email at moses@folkhogan.com

Background
This song was written in 2011. Before we even recorded the first album, we were aware of the perception that many people had of FOLK HOGAN being just a “drinking band” that only played drinking songs. We made a conscious decision that we wanted to write our second album geared towards more of a “festival” feel. We were a little concerned that our “drinking-central” songs would cause us to be excluded from shows and festivals we were trying to play. This fear wasn’t unfounded. Even that early in the band, we had festivals and venues turn us down since they had heard we were a rowdy, drinking music band. They weren’t wrong, but we wanted to have those opportunities. Canyon then approached the band with the concept for The Show: a concept album on a circus and the interweaving stories of the various performers. He had written Ringmaster, part of Lion Tamer, and Elephant Rider. The band made the collective decision to go that route, and we started working on it even before we recorded the first album. This is what Said The Beast To The Bearded Lady was born out of. If you don’t already have the song, you can find it here.

Lyrics
As the name suggests, this song is a soliloquy spoken by the Lion Tamer to The Bearded Lady. In the song “Lion Tamer”, it is revealed that the lion tamer feels that he himself is a beast, just as the lions are. He feels like a wild animal who is unfairly caged in his life, and struggles to differentiate himself from a lion.
In the eye of the storm
You are keeping me warm
And I’m keeping the lions at bay
The song opens on our protagonist, the Lion Tamer. He is in “the eye of the storm” or the center ring of a circus, surrounded by all sorts of performers and a roaring crowd. His is “kept warm” by the love he has in his heart.
Oh, none can do harm
As I’m wrapped in your arms
I don’t care what people may say
here, we are given the first glimpse that things may not be as they seem in many ways. First, there is something odd about the situation. What would be said to hurt them, and who would say them? It is the first acknowledgement that something is different with his lover. Also, this is a reference that there is a dark force within the circus itself that is putting a negative pressure on the lovers. The lion tamer feels invincible to the perils of his job or the words thrown at him by the crowd because his love is so strong
If night comes too soon
We’ll just dance with the moon
And sing until we’re back in the day
Each night when the circus is closed, the lovers meet. They hold each other and dance all night, completely enthralled in each other; until mornin when they have to return to their posts and perform
We’re cheered and we’re chased
For your beautiful face
How I love you
Here we are again met with the information that they are both lauded (cheered) for the appearance of his lover, and also ridiculed for it (chased). Nevertheless, he loves her unwaveringly.

The second verse begins with the protagonist recalling his fist time meeting his lover
I remember the day
When I first saw your face
Shocked with the beauty I saw
It is important to remember that the Lion Tamer views himself as a beast; as a lion. He sees a woman so beautiful, he is in shock.
Your porcelain skin
And your hair in the wind
Had all of the masses in awe
She is fair skinned; and her hair is flowing in the wind. This is not just the hair on he head, but also the hair on her face. Beauty is in the eye of the beholder, and in this case the beholder is a beast. Yes, she is a beautiful woman, but she is also covered in hair; beastly in her own right. She is trapped like him.
I approached your stand
And asked for your hand
Abruptly a beast with no claws
He is so struck by her beauty, that he approaches her on her stage and asks to take her hand and love her. His beastly tendencies immediately retreat as for the first time he is filled with love, and a desire to be meek
The crowd was aghast
They taunted and laughed
And recoiled
And my blood boiled
His desire to be calm is immediately overcome with rage as he seems the crowd. They taunt the two of them, treating them both as beasts rather than lovers. They say unspeakable things about her appearance, and his anger cannot be contained

I won’t let them mock you my dear
Now I’m back on all fours inspiring fear
Snapping my jaws & slashing my claws
To the roar of the audience cheer
Our lions take them down
As I roar
His reaction to the crowds treatment of her is swift. He returns to the anger that only a caged beast can know. He is “Back on all fours” ready to snap his jaws and claw the crowd for their cruelty. He desires to free his lions, and join with them as they feed on the flesh of the crowd for the horrible treatment that they have thrown at the bearded lady. He roars, as his transformation to beast is complete; he now has a tribe to defend.

And we’ll live the life of beasts
Their cheers will never cease
When we step in the ring
Hear the audience sing
We are royalty
As I roar
The two lovers will live together as caged animals under the control of the Ringmaster. Unable to escape his power over them, or to escape the crowds that come to see them. He believes that the crowd will see them as the royal couple of the circus, whom everyone comes to see. This Will cause friction later, as the Ringmaster is the center of the show rather than the lion tamer.

You kissed me on the lips
And handed me my whip
The Bearded Lady is able to calm the Lion Tamer. She kisses him and soothes him… then hands him his whip and tells him to “go to work” and make these people pay for the cruelty the two of them have had to endure.

As I whip at their hides
With you by my side
The ringmaster says we’re at peace
The ringmaster knows that if he can keep the lovers together, he can keep them in the circus as neither fit into the regular world. The Lion Tamer and Bearded Lady continue their shows, and meet each night. They are able to make it through the horrible treatment because they have each other.
Now has come the day
Our Happiness stays
Lamb has laid with the beast
They have both found their happiness together, and her presence soothes him and keeps him from becoming too wild.
When we step in the ring
Hear the audience sing
“which is the beast and the man”
I pull my whip back
And throw it to a crack
You say “I am what I am”
However, when they step into the ring to do their performance with the lions, someone heckles the bearded lady and insinuates that he can’t tell a difference between the two. The Lion Tamer pulls his whip back to direct his lions at the crowd. The Bearded Lady saying “I am what I am” is her acknowledgment that she has become a beast the same as her lover, and rather than soothing him she will abet his tendencies and reward the cruelty of the crowd with cruelty of the beasts.

I won’t let them mock you my dear
Now I’m back on all fours inspiring fear
snapping my jaws, sharpening my claws
to the roar of the audience cheer
I’ll soak my teeth in blood
They attack, along with their lions, and exact revenge on the crowd for their insolence.

Writing Process
It seems as though every song has a slightly different path to get to to the stage. I wrote this song, lyrics and music, in the front room of the house I was living in in a couple hours. I brought it to the band as a nearly complete song, which is not usually the way things go. Typically songs are written by a couple of us together, or part written by one person and then others help finish it. There were some changes made by Jared, and our drummer at the time Jeremy. Mainly, the middle instrumental section was trimmed down to be shorter and more dynamic. The dynamic changes throughout the song were added, and the main addition was the banjo and the accordion parts. Canyons accordion part accompanies the mandolin part excellently Nick and Jared added the swelling guitar and bass sounds for the first and last verse for live performances. This is one song that sort of fell off the table after awhile and wasn’t performed very often for a number of reasons. If Rob Page wasn’t a fan of it, we would probably play it a fraction of the amount that we currently do.

I have always loved this song a lot. It is an outline of how love can soften your rough edges, and also make you do crazy things. I tried to convey a sense of “hollowness” by not having lyrics over the bridge, and also by not talking much about their lives outside of their performances much. For me this song is an echo of my own inability to see the good in myself, and feeling utterly unlovable as I did at that time in my life. It is about that desire to feel loved, that desire for freedom, that desire to prove your naysayers wrong, and most of all the desire of desire.