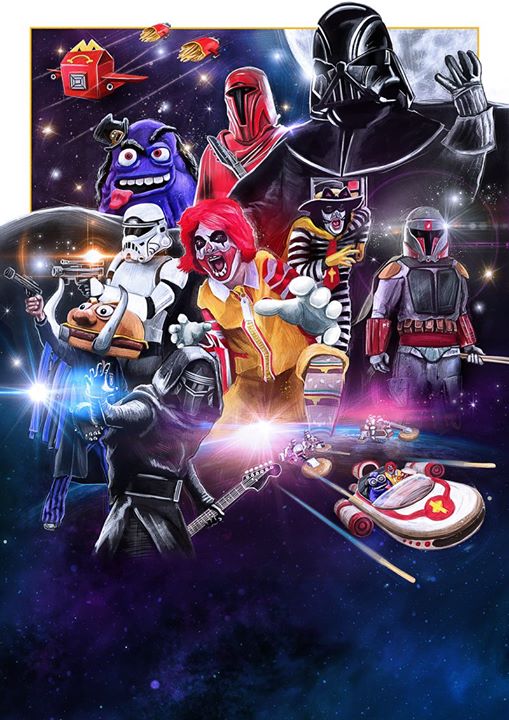 MAC SABBATH
It was the Year of Our Lord 2013, and I was devouring a cheeseburger in a Chatsworth, California, franchise of a certain multinational fast food conglomerate which shall remain nameless. Out of the corner of my eye, I noticed a crazed looking clown walking in my direction. Wearing a costume of bright yellow and red, and giant shiny shoes, he seemingly fit into the surroundings, but it didn’t take long to see that something wasn’t quite right. His costume was trailed by long, tattered, hippie fringe that was dirty from scraping the floor (and most likely the alley behind the restaurant), and more alarmingly his face was caked in ghostly make up that looked like it had been smeared on with a putty knife. My first thought was that he looked like Skeletor as a member of Uriah Heap. Taking a seat in my booth, he informed me that his name was Ronald Osborne, and he that he was familiar with my oddity rock band Rosemary’s Billygoat. He was a fan of the band, and said he had a concept I might appreciate, something he termed “drive-thru metal.” Some of the delinquent kids who worked for the franchise had been allowing him and a cast of characters named Slayer Mac Cheeze, Grimalice, and the Cat Burglar, to perform secret rock shows in the bunker-like basements of the local restaurants. But the time had come, he said, to bring drive-thru metal up from the “underground,” and he asked if I would consider becoming the manager of his band. I asked him what the act was called, and proclaimed with pride, “MAC SABBATH!” I barely had time to gather up what was left of my faux food before the restaurant’s manager, apparently annoyed both by the disheveled clown and the content of our conversation, came over and forcefully assisted us out onto the street. As we hit the sidewalk, I looked over at Ronald, watched him brush the dust of cold fries, sodium chloride and GMO remnants of my UN happy meal from his grease-smeared clown suit, and couldn’t help but think there was something special, perhaps even great, about the man. He invited me to one of these secret shows, and two nights later I was sitting in the basement of a fast food restaurant in the San Fernando Valley, my eyes and taste buds tingling to a new sensation. Drive-thru metal was real, and talk about a feast for the senses! Black Sabbath’s music, hilarious fast food lyrics, smoldering clown heads with laser eyes, a giant purple gumdrop bass player, and Tony Iommi with a giant cheeseburger head. I was confused, amazed, and dare I say it, can’t ever remember feeling so………happy! I told Ronald that yes, I would love to manage his band. It wasn’t going to be easy—nothing ever is with a disturbed clown and a band of Monsanto mutants who refuse to reveal their identities because they think they came here from a wormhole in space time direct from 1970. But whoever they are and however they got here, they’re here now and they’re ready, so pull up to the window and check your order, because I am proud to present the world’s newest concept in entertainment, the culinary disgrace that is MAC SABBATH!

GALACTIC EMPIRE
A long time ago in a galaxy far, far away…. actually fairly recently – a new heavy metal band was formed by some of the most infamous and feared villains in the galaxy. Introducing GALACTIC EMPIRE.

The band performs classic pieces from the iconic soundtrack of the Star Wars films written by John Williams.

Dark Vader (guitar) had the following to say: “These instruments are crude but should be adequate to shred some faces as we journey across the galaxy. We have been doubling our efforts to complete our debut full-length album in time for the Emperor’s arrival. If you are not part of the Rebel Alliance or a traitor, buy our single on iTunes and prepare to succumb to the Dark Side upon our album’s release.”

Watch the music video and then download your copy of the “Star Wars Main Theme” single on iTunes. May the force be with you.