TRIFECTA 3 Brings Gypsy Punk to Bar Deluxe Salt Lake City October 4th
Underground bands Folk Hogan, Hectic Hobo and Juana Ghani join forces once again for one night to bring TRIFECTA 3 to Bar Deluxe Salt Lake City.
Salt Lake City, Utah – Gypsy punk bands Juana Ghani, Folk Hogan, and Hectic Hobo co-headline their return to Bar Deluxe (666 S. State Street in Salt Lake City) for TRIFECTA 3 on Saturday, October 4, 2014. TRIFECTA, an event these friends created in 2012, is the only time each year that all three bands appear on the same ticket.
In a true sibling rivalry fashion, the order of performances will be determined at the very beginning of the night by their traditional high-spirited drink-off and tongue-twister contest. Nobody, not even the bands themselves, will know in which order they will perform until that moment. What will follow can only be described as pure Gypsy punk mayhem and madness!

Folk Hogan “plays with an intensity that is almost exhausting to watch,” says Kelly Cannon of City Weekly. Their sets are always high energy, full of sing-a-long drinking songs and an unapologetic whiskey-soaked naughtiness that Richard Barry of Doldrums Entertainment describes as “like watching a pirate super hero group.”
Hectic Hobo performances immediately engage the audience, sucking them in and not letting them go until the last cymbal crashes. Hectic Hobo is the fun that everyone wants to have but doesn’t dare. Theo McNamatar of The Regal Seagull has says “Hectic Hobo makes you feel you’ve been at a Devotchka concert on an Irish pirate ship. And you will do anything to keep from getting back to port.”
Juana Ghani shows are known for fabulously infectious music that is “a savage, unrestricted mix of tradition, overlaid with rocking dynamism, suffused with unstoppable gypsy lust and dark desire, with an added touch of punk attitude.” (Tim Carroll, FolkWords) Accompanied by the area’s most amazing belly dancers and performance artists, it is more than a concert; it is a show. And Juana Ghani is more than a band; they are a community. 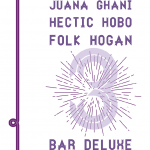