A fond farewell to a friend | FOLK HOGAN

A fond farewell to a friend 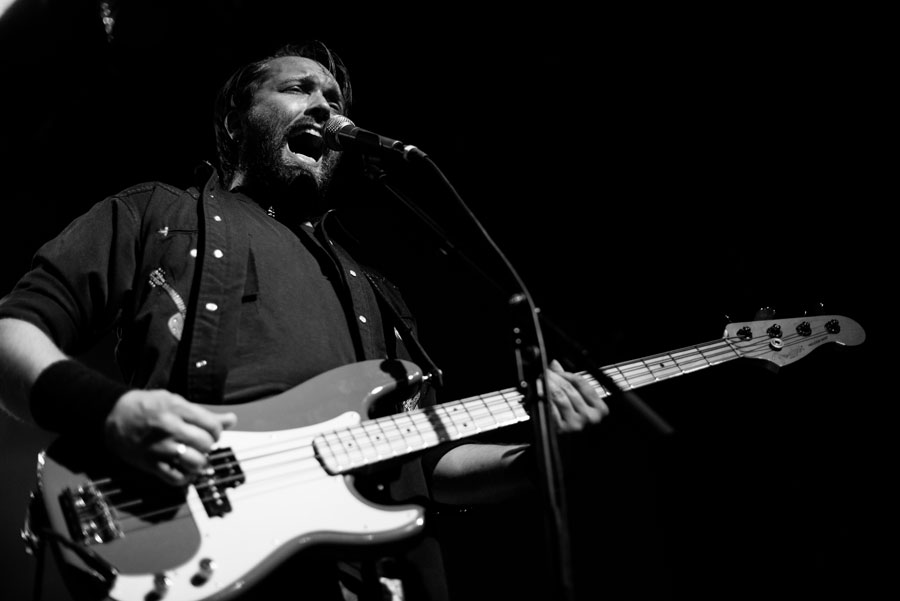 On May 18th, 2011 at Burts Tiki Lounge we played our second show. We were still figuring things out then, but we had Canyon on accordion, Nick on guitar, Tanner on banjo, and Jeremy on drums. In the crowd that night were two guys standing next to each other; Jared and Curtis. 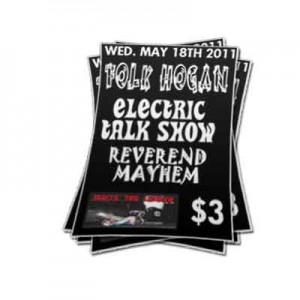 Why am I recounting this to you? For nearly nine years Jared has written fabulous bass lines, performed fantastic vocals, written beautiful songs, and most importantly been our friend, and our brother. 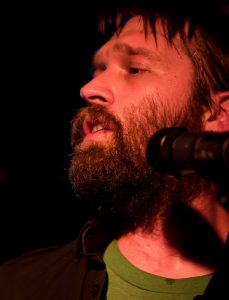 On January 25th, 2020 at The beehive social club (666 south State street) Jared will be playing his last show with us. He has played with us in eleven states, and four countries. He has played on all three of our full length albums, and our long lost EP. He has worked, and sacrificed, a reaped the rewards of this band as well as dealt with the consequences of it.

What people may not know is that Jared works for a company that actively saves peoples lives. That job has given him opportunities that he wants to take, to make the world a better place. We couldn’t be more proud of him, and we wish him the best. He will always be our brother. We will always cherish the time we spent with him, and the hard work, dedication, sense of humor, and drive he brought to the band. We love him, and we will miss him dearly. As we transition to trying to tour more, Jared has decided to focus on his job and we commend him for it.

I’ve asked each of the fellas to write something up about Jared to show how important he was to us:

“I’ve been in a band with Jared for 9 years. A lot of people have come and gone during that time. When you spend nearly every holiday traveling and playing shows together with a group they become your family.

We all extremely sad to see him go but we know he’s leaving for other opportunities that will fulfill him and enrich his life. Good luck and we wish you the best!”

“I’m at a loss of words with what I can possibly say about Mr. Hayes. He’s been an amazing friend, brother, and mentor for these past amazing years. Some of my most favorite times happened in Idaho when a group of friends and I went up to go see the solar eclipse a few years ago.

We found a bar after the drive and immediately the bartender said “doubles are half off” to which Jared and I replied “..uh.. yes. Yes we will do that”
The bartender graciously poured us 4-5 fingers in a tumbler glass to which Jared said “let’s shoot it!”
I protested.. a lot… but eventually gave in. Did a few more of those aaaaand forgot some of that night aside from Jared dealing with my drunk ass after picking me up from the bar because for some reason he wanted to eat some
dry ass Denny’s. #dryfood

That weekend was amazing, and one for the books as it was filled with music, booze and an incredible astronomical event that I’ll never forget. But that’s the type of guy Jared is. Adventurous, full of fun, and wants to make sure everyone is having a good time at all costs.

Then there was that one time that I saved Jared’s ass after he backed into a nice woman’s Mercedes while we were on tour, but we’ll talk about that another time.

To sort of quote the movie Simple Jack, “He’s got a g-g-gg-good BRAIN.” Love you Jerbil!” 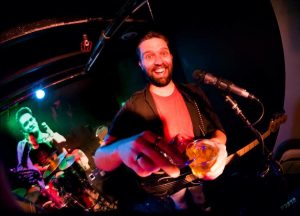 Always an advocate for more shots

“One of the most significant memories I have with Jared was before either of us were in the band. It was the first time I had ever been to Burt’s Tiki Lounge and we were both there to see FOLK HOGAN. He was one of the only people I knew there, so I stood next to him at the bar as we watched the band play. After a few songs, Jared says, “They need a bass player. I’m going to play bass for them.” I responded, “When they need a drummer, I’m going to play drums for them.” Now, if you know anything about Jared, you know that once he says something is going to happen, it happens. So, the next day or close after, he talked to the guys and the rest is history.
Without Jared Hayes, not only would FH have been a totally different band, but we would also be different people; myself especially. Thank you, Jared, for having such an incredible impact on everyone included in the journey that is FOLK HOGAN.”

A few days after that show I talked about at the top and Curtis just told you about, Jared was at our practice space, known as the FOLK HOGAN Saloon, and was immediately dazzling us with his musical ability. He set up his gear at far stage left. Only a few weeks later he played his first show with us at The Woodshed on January 10th with Vena Cava and South Of Ramona 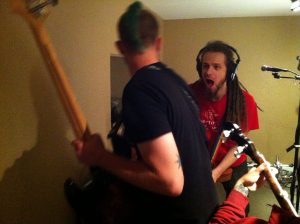 Canyon Elliott:
What can one say when someone loses someone? Not that Jareds dead, but on a certain level he might as well be. After seeing and spending so much time with someone, day in and day out, for the better part of a decade, Then, wzhipt, just like that, it all stops.
I think I’m trying to liken his departure to soldiers loosing a brother in arms. A little dramatic perhaps, but you think you know someone so well. When you’ve been through what we all have together, you really think you get to know a person on a core level, just to find out they have hopes and dreams you never knew about. Or maybe, I just never bothered to ask. Or even more likely, I simply didn’t want to know. Perched upon a throne of denial in desperate hope something so intangible can last forever. 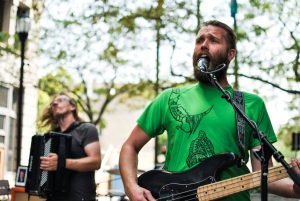 There were those moments though, (Now looking back, I realize were fleeting and so very special.) that I would give Jared “the look”. He always knew what I was saying, without saying a word. It would happen before a show or even during practice. We would both quietly sneak away, meet outside and run to the nearest bar, order a shot and a beer, speedily guzzle the libations down with a quick vent about the current conundrum vexing us as a chaser, Then return feeling better, without anyone the wiser.
Those moments. No more than ten minutes at a time, we’re probably the truest we could be with each other. Then just like that, ten minutes turns in to ten years, and it’s over. Never to happen again. At least not in the same way. So I will have one more beer and a shot, in the name of Jared and those moments, and wish him well on his new path fucking robots or whatever the hell he’s doing next.
Cheers.”

Taking Jareds place is our good friend Scott Wardle, who has played bass for us when Jared went to South America a few years ago. Scott is an amazing, skilled, great person as well; so we hope you give him a warm welcome when you see him play with us for the first time.

“My first interactions with Jared was while he was working at guitar center. I knew him then as “the bass player for Folk Hogan”. I looked up to him right away because, well, he’s taller than me. After a few years of interactions I’ve come to look up to him for his talent, knowledge and generally good sense of humor.

Jared is an extremely good musician, and I have some tall boots to fill. I’m truly honored to be chosen as the new bass player of FH. I hope that between our mustaches, years of bass practice, and dick piercings it will make for a smooth transition. RIP old Scott. I’m happy to be the new Jared.”

MOSES:
“There are a number of things I could choose to share about my time with Jared. I could recount When we had to pretend to be married to avoid a very aggressive festival-goer who wanted to bed us. I could talk about the magical night we jumped from roof to roof on main street in Park City after a show. The story of the middle-aged truck stop worker who asked how long we were in town for after Jared made a joke about fisting. I could tell the tale of our first Beerball Championship. Or our second. Or our third. Or our Fourth. Or our fifth. Or our sixth. Or our seventh. But I’m not here to brag, so I won’t mention that stuff. 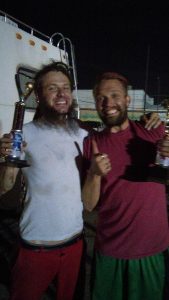 What I would like to tell you is that Jared has been a band mate, a brother, a friend. His contagious enthusiasm, his powerful voice, his dedication to his life, his compassion toward others, and his unwavering friendship will not be forgotten. The words do not exist to sum up how much we love him.
There was a time, years ago, when Jared and I worked together. It was a dark time, filled with sorrow, and pain, and uncertainty for me. Every day he was there to put his arm around me and tell me it was all going to be ok. That it wasn’t all for nothing. That things would get better. And there were times where we would be in the van, on some lonesome stretch of highway, blasting Mars Volta’s Deloused In The Comatorium album while air drumming and talking about how Jon Theodore is so fucking good.

But most of all, for nearly ten years I could look to my left a few nights a week and meet his eyes. In those moments, nothing can be explained. In those moments we were in fact gods. In those moments it never mattered how small the stage was, or how few people were at the show, or how little sleep we had, or how we felt off stage, or what was going on anywhere but right there. There is a bond that you share after so many years together on stage; one of the strongest bonds I have ever felt.

I couldn’t be happier for Jared. I love him, and I know he will be helping others as he helped me, and as he helped everyone around him his whole life. Jared is the spark that lights fires wherever he goes. He is a giant.

He is a god. I will miss sharing a stage with him on a regular basis. Cheers, pal. I love you.” 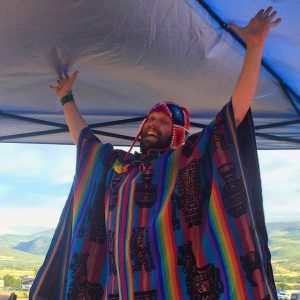