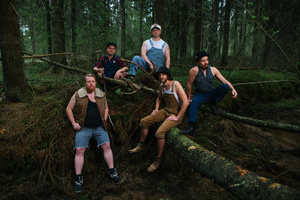 What do you get when you put five rednecks in the same barn? A full set of teeth, of course! Unless the clodhoppers happen to be Finns, in which case they’re going to start a band and will take over the world.

Steve ‘N’ Seagulls are, basically, a YouTube lark gone horribly, horribly wrong. Back in the summer of 2014 a bunch of Finnish musicians played a hillbillified (yes, it’s a word) version of AC/DC’s “Thunderstruck” on their barnyard wearing the goofiest apparel possible and shot the darn thing on video. Eventually nobody got more punked than the band themselves, having to witness the video ramp up millions of views in just couple of weeks and landing the fledgling band on the websites and magazine pages of elite metal media, Guitar World, Revolver, Loudwire, Blabbermouth and Metal Sucks leading the way.

Following a strange logic, something like Steve ‘n’ Seagulls probably couldn’t even have been born anywhere else than Finnish countryside, Finland being the most effervescent metal band hotbed on the globe (53 heavy metal bands per 100,000 people) that even President Obama has acknowledged. However Finnish their origins, the Gulls’ chawbacon representations of legendary rock tunes sound astonishingly American and hit the spot like Georgia Apple Pie Moonshine: this stuff is sweet, fun and 140% proof – equally capable to get you hammered and to set you on fire!
Since they dropped in the middle of the scene like a home-made fertilizer bomb reaching millions of viewers with their YouTube hits, Finland’s finest farmers Steve ‘N’ Seagulls have played 175 shows, toured in 20 countries and a dozen US states, graced the stages of the awesomest metal festivals on the globe like Wacken Open Air, Sweden Rock, Summer Breeze, Rencontres Trans Musicales, Qstock, Nummirock etc., rattlin’ regiments of riotous rockers with rabble-rousing renditions of sempiternal rock and metal standards. The Gulls’ chock-full gig calendar says it like it is: Line dance head-banging is now officially a global craze and it keeps on spreading like wildfire!
Mere 16 months removed from their shake-rattle ‘n’ rollin’ debut “Farm Machine”, the country cousins now shake the foundations again with 14 new bumpkin tracks, breathing some fresh countryside air to another batch of immortal rock classics. This time it’s the tunes of Guns ‘N’ Roses, Metallica, Megadeth, AC/DC, Iron Maiden and the Gulls’ countrymen Nightwish among others who get pummeled with the hick stick – and their 1st original song to boot!